My Interview With John Basedow 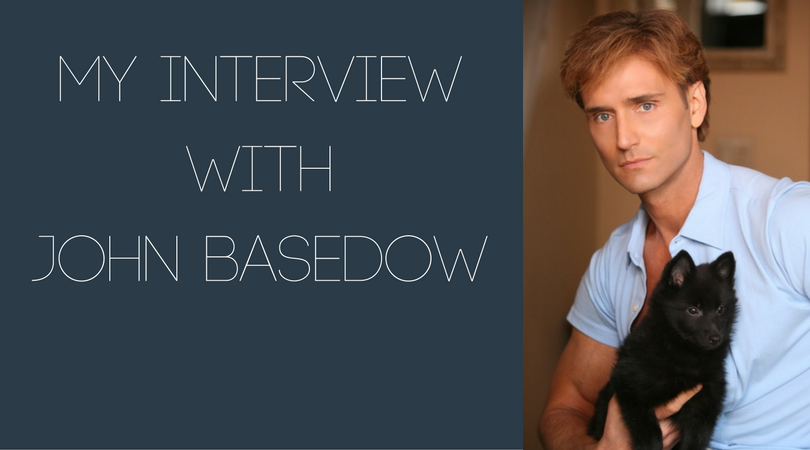 My Interview With John Basedow

This week on the blog I get the pleasure of interviewing John Basedow. John is a TV and Internet personality, news reporter, model, author and motivational speaker. He is the creator of the best-selling Fitness Made Simple video series that has helped to improve the bodies and lives of thousands of men and women across the country.  He is an extremely successful entrepreneur that we can all learn something from.

In your bio it talks about a “rags to riches” story – can you discuss that and what you believe have been the key factors to your success?

My first success came from bestselling Fitness Made Simple videos and DVDs. The line “rags to riches” was actually taken out of the LA weekly magazine. I was on the cover of the celebrity section with a story that was basically “who is John Basedow and why is he on TV so much?” That was a great article and it helped catapult me into the media spotlight.

I would say that the two things that were probably most important to my success are persistence and determination. You cannot go away, you cannot quit. When you are trying to accomplish something it is going to take a lot of work and it is going to take a lot of effort. There is no such thing as an overnight success; it’s always a 15-year overnight success. There were many doors slammed in my face, there were many unreturned phone calls, many nay-sayers and many haters, and anyone trying to do anything worthwhile is going to face them. That’s where persistence comes in. You have to have a single-minded vision, a laser beam focus on your goal and never give up attitude. When one door gets shut in your face, you either keep going back to that door or go for a new one. Always be polite, always be respectful, but keep going back.

There is going to be a lot of times when, if you really don’t believe in your goal and it’s not something in your core that you want to achieve, you will never be successful. This is where determination comes in. You have to really have an undying love for what you want to do and every day keep pushing towards achieving that.

John, your motto is “believe in yourself and you can accomplish anything” – where did that come from and how do you apply that practically in your life?

This is a motto that I came up with personally. At times during my journey I wasn’t able to pay bills and was nowhere near where I wanted to be. The only thing that I had at that time was the belief in myself. If you have that as your foundation, you can build anything.

I always know that I will have that belief in myself. Many times things don’t happen in the timeframe that I would want or anticipate, but I continue to believe in myself which allows me to push forward.

What role does fitness play, specifically in the lives of entrepreneurs?

You can be the richest and best-looking person in the world but if you don’t have your health you have nothing. Entrepreneurs have so many obstacles in their way on a daily basis that if their health isn’t in check, they won’t be able to deal with all the things they have to. It is not necessarily about getting a six pack, it’s more about eating right, getting enough exercise and getting enough sleep so that you are able to function in the long run to go after your goals.

What has led to your success on social media and how can others learn from you?

We are currently in the most connected world history has ever seen, but at the same time the most disconnected world. Through social media we are able to connect with people around the world but we are spending so much time on social media that people are losing their communication skills.

The way to have success on social media is to find a way to cut through all the “clutter”. Everybody is their own reporter and everyone can be their own star. While this is great, it dilutes everyone’s voice. One of the things that help to do this is having a defined message and giving something of value to people. Presenting your message as: a tip, inspiration, motivation etc. Unless you can get people to feel indebted to you or feel you are helping them, I don’t believe you can cut through the clutter no matter who you think you are.

Second, you need to interact with your followers. It is not enough for people to engage with you, you need to engage with them. People have a perception that if you have a lot of followers, you are probably a stuck up person and will never respond. You need to interact with your followers and be real. I have seen so many situations where people comment on a popular social media person and they didn’t respond to anyone. People are pouring out their hearts and saying how much they love this person and they simply don’t respond. I don’t believe that is right and I do my absolute best to respond to every single comment that comes through my social media.  You have to be genuine, have to have an attitude of gratitude, you have to be real and you have to break through the clutter.

What has been the biggest lesson learned on your entrepreneurial journey that you’d like to share with others?

My mom is a personnel manager for a major firm. She is a very bright and talented woman. She always talks about how difficult things are in this world and how everyone needs a plan B. I never followed that advice because I always felt that plan B was your first failed plan. I would rather be living in a box trying to do what I believe in then living in a palace hating every single day of my life. If you are an entrepreneur and going for a goal, there is no such thing as no. If you get a “no” from someone, it is simply a no for now. Things change every day. Every single station that Fitness Made Simple aired on turned me down at first. I remained determined and persistent and it eventually paid off.

Given all of this, it is very important to remain polite. Many people are petrified of confrontation and saying no. Instead, they give you obstacles you need to overcome, just to see if you will give up. I was always polite but persistent and in the long run it paid off. You need to continue to keep overcoming those obstacles and eventually the ‘no’ will turn to a ‘yes’. Once you get one yes, it will become much easier to turn other no’s into yes’.

One final thought is to never settle. Don’t settle for less then what makes you happy. As soon as you settle in one area you will begin to do it in others and you will wake up 10-20 years from now wondering what happened to your life. There are so many people who are so talented that simply don’t have the never-give-up attitude and end up settling. I have seen them wake up 10-20 years later, full of regret.

I want to take a second to thank John for speaking with me. He is an incredibly successful entrepreneur and shared some great wisdom. I hope this has been helpful for you all. Well see you next week!