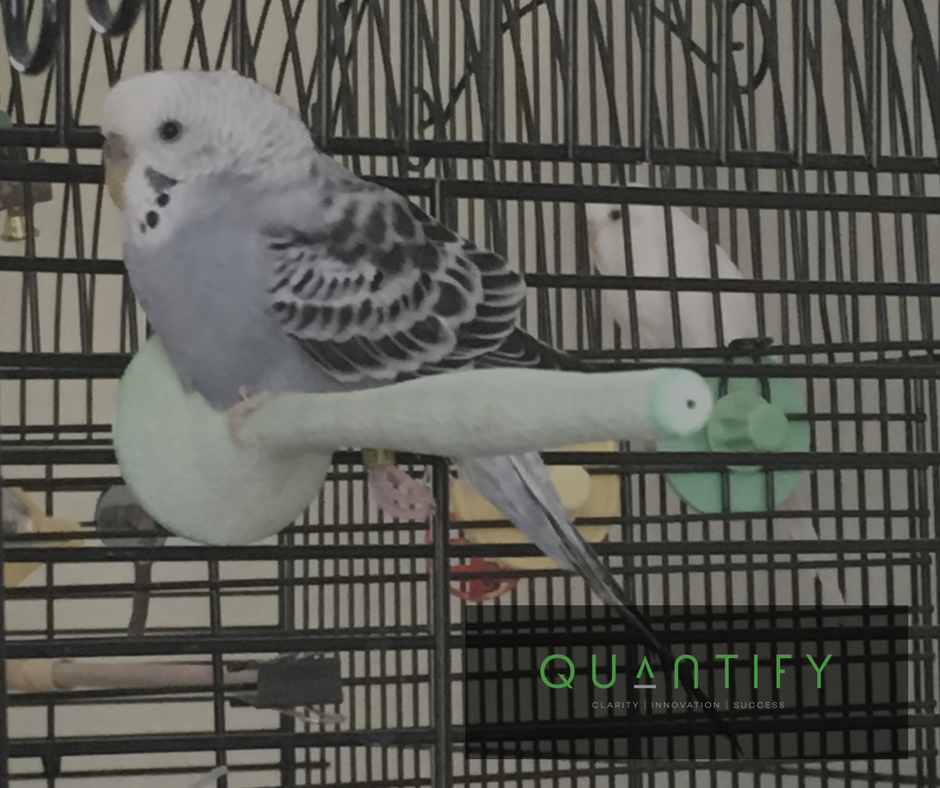 I usually write something about sports for everyone one of my articles, but this week I have something else on my mind.  For the past month or so, my pet parakeet Larry Bird (yes, he is named after the basketball legend!) had been battling a tumor in his leg.  The little guy battled so hard every day as it progressively got worse.  Even through this all, you could tell that he kept his spirits high and seemed to be in a good mood all the time.  As the days went on, I could see that everything he tried to do on a day-to-day basis seemed to get tougher and tougher.  During all of this, I kept asking myself the same questions every day – Am I doing the right thing by having him stay alive?  Of course, I didn’t want to put him down but I also did not want him to suffer.  From everyone I spoke to about it, including the Vet, they said you will get the sign when the time was here.

When I woke up on Tuesday morning at around 5:30 AM, my wife told me that Larry was on the bottom of the cage and breathing heavy.  When I came down to check on him myself, he didn’t look good at all.  It was apparent today was the day.  So, on March 28th at 1:30 PM we took him to Vet.  It might sound crazy to some, but I could tell he knew what was going on.

To say the last the few days have been challenging for me is an understatement.  But what gets me through this tough time is knowing that he didn’t suffer at all.  He did end up letting me know when it was time.  So I am dedicating this article to Larry Bird, rest in peace little buddy (pictured above).

Hopefully I didn’t make anyone too upset there because, as promised, here is part 2 of the understanding the K-1 – the “numbers” section (Part III of the K-1) and the footnotes.  In order to not overload you with information, I am going to split this up into two parts.  In this article, I am going to cover the income amounts and next week’s article will cover the deductions.   Just a note, I am writing these next two article’s from the perspective of an individual recipient.

The amounts included in boxes 1 through 3 (ordinary and rental real estate income/loss) are generally reported on Schedule E of your Form 1040 if you are actively involved in the partnership.  If you do not meet the tests to be active, the income/loss is considered passive.  Then things get tricky.  If you have income, of course that is taxable.  If you have a loss, you must then pass the Passive Activity Loss limitations via Form 8582.  Without getting into too much detail, the general idea is that you can deduct the loss if you have enough tax basis to do it and if you have other passive income to offset it against.

Box 4 is the Guaranteed Payment line.  In general, partners in a partnership do not receive wages.  If you are a partner and the partnership is paying you a fixed sum of compensation that isn’t based on partnership income, then these amounts get reported to you on this line.  These amounts then are also reported on Schedule E.

Box 7 is for Royalties received.  These also are reported on Schedule E.

Boxes 5 (interest) and 6a/b (dividends) get reported on Schedule B of your 1040.  Note that the qualified dividends in Box 6b are already included in Box 6a.

Box 9c, Unrecaptured section 1250 gain, is also another special tax rate – 25%.  These types of gains are derived from the sale of real estate when there is a gain and depreciation was taken against the basis of the property.  The amounts here are also reported on Schedule D.

Amounts in box 10, Net section 1231 gain/loss, are from the sale of tangible property.  Amounts in this box are generally reported on Form 4797 and have special tax treatment.  Gains are reported as capital gains income and subject to favorable tax rates.  Losses are treated as an ordinary loss at your effective tax rate.

Box 11a (other portfolio income/loss), and Box 11F (other income/loss) will generally go through the active or passive tests as described above.  In addition to this, the partnership should attach a statement for the breakdown of the items reported in these boxes to assist you in how to report them accurately.

Box 11b (involuntary conversions) is gain/loss due to a casualty and theft.  The amount will be reported on Form 4684 and is subject to limitations.

Box 11d (mining exploration costs recapture) – this is a deeper topic for another day.

Box 11e (cancellation of debt) – depending on all facts and circumstances, this is reported on Line 21 of your 1040 or is used to calculate your basis reduction on Form 982.  Again, this is a deeper topic for another day.

Hopefully I didn’t bore you too much!  As you can see the way the amounts are reported to you on the K-1 can have a dramatic effect on your taxes.  If you have any questions feel free to contact me.